Even so the tongue is a little member, and boasteth great things. Behold how great a matter a little fire kindleth!

And the tongue is a fire, a world of iniquity: so is the tongue among our members, that it defileth the whole body, and setteth on fire the course of nature; and it is set on fire of hell.

The use of one’s voice is extremely powerful. It can be used as a weapon, or an olive branch; up to the speaker to determine which purpose it serves. In 1994 Rwanda, a popular radio channel, Radio-Television Libre Des Milles Collines (RTML) used their voice in the most destructive way possible: in the incitement of genocide. Beginning in April 1994, the majority ethnic group in Rwanda, the Hutu, would commit murder against the minority group, the Tutsi. In the most efficient and destructive genocide the world has yet to see, 800,000 Tutsi had been murdered in just one hundred days.

The radio strategically used the power of language to play on Hutu fears, leading many to believe that if they did not act fast, they would become the victims of Tutsi violence. The radio station, originally popularized by their charismatic hosts and introduction of popular music, slowly began to ease into a more sinister tone. They would refer to the Tutsi minority as “cockroaches” that needed to be destroyed. A common tactic was the false reporting of local and international news by the show’s hosts. Most notably, the death of the Burundi President was grossly exaggerated in order to appear as though it came from Tutsi extremists. With a long history of tug of war over elite power, the news of a potential rise of Tutsi power was too much to bare.

After laying the groundwork for hatred, the radio would take it one step further. The Hate Radio, as it is commonly known, would be famous for providing details of the names and locations of Tutsi, ordering their death. A common sight during this time would be people roaming the streets, “wielding a weapon in one hand and a transistor radio piping murderous commands in the other.”

Hutus during this time were being called to duty, murder was their mission, and hundreds of thousands participated. From the first establishment of radio in 1961, people were taught to take what they hear on the radio as gospel truth. With that being said, many Rwandans that played a role in the genocide would later claim they had done nothing wrong. The power of the radio, often thought of as the voice of god, had explicitly told them to do it.

After the condemnation of RTML, Rwandans are left with the guilt of that they had done, and what they had believed to be true. Nearly twenty-five years after this horrible period in Rwandan history, the media continues to play a role. Now, they aim to use the power of their voice for peace. In order to regain trust, radio soap operas have been introduced as a form of education-entertainment (edutainment). Musekeweya, a popular radio soap opera, has been used in order to teach coexistence and peace. It tells the tale of a fictional inter-group conflict, the troubles this conflict has caused, and their ability to reconcile. According to social cognitive theory, certain behaviors can be encouraged or discouraged through the use of positive and negative characteristics of the fictional characters.

The use of education-entertainment programs to restore media trust can be seen as a win, however it does not come without its limitations. The unfortunate truth is that the overwhelming fear of a resurgence of violent incitement created an environment of incredible censorship. Control over journalists, media, news, and television is far more restrictive than it had been in the past. President Kagame has imposed such harsh laws that one can face up to five years in prison or up to $4,000 USD in fines if they are caught reporting anything seen as discriminatory towards a group. The fear of punishment, and the strict government control has molded this country into one lacking the freedom of the press, as well as freedom of speech. Can the voice of peace truly be heard when it is forced in that direction? A healthy media environment requires two things: legislation against libel and slander aimed at protecting private individuals, and legislation protecting journalists and media outlets guaranteeing their freedom to report without government intervention. Rwanda is missing the latter.

Rwanda serves as an extreme example of how the power of the human voice can be destructive. At this point we can only hope that the shift towards a voice of peace takes, despite strict government control,  and that the Hutu and the Tutsi can coexist together once again. 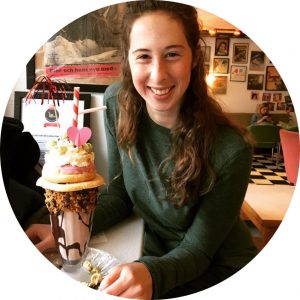 Samantha Goldberg is a student in the Holocaust and Genocide Studies program. This heavy subject does not bring down her bubbly demeanor, she is lighthearted and quick with a joke. Outside of her school life, she enjoys baking, running, and eating pizza. In the future, she dreams of adopting a puppy and perfecting the art of bread making.