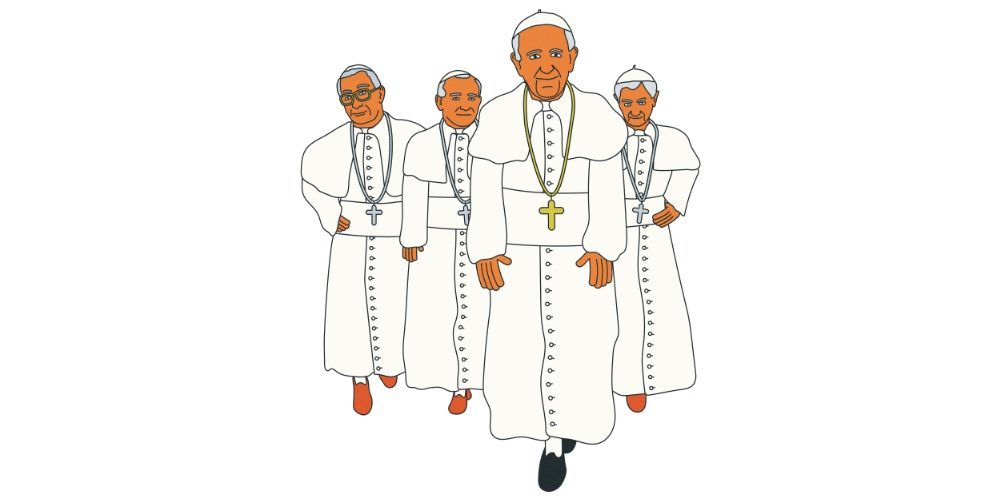 There is one state in the world without any maternity hospitals, where all its citizens have parents who are foreigners and most of whom make a vow to never marry. It is the heart of a religion followed by 1.2 billion people that worship the Holy Mary, who gave birth to Jesus, the son of God, without ever having sex. This important detail is fundamental for understanding the importance of moralising sex, preaching the worshipers from the beautiful palaces of the Vatican in Rome – the heart of Catholicism.

Considered the above, many would assume that the Vatican, a state which by extension is smaller than Arlanda airport, would be as immaculate of sex as their preaching. Whilst on the contrary, historically and today, sex and the Vatican have been closely connected and even the most recent scandals portray stories of carnal pleasures amongst senior members of the Church that go above and beyond most Catholic worshipers’ deepest and wildest fantasies.

The Catholic Church has long been at the heart of sexual abuse scandals, often involving children. Amongst its priests and nuns there have been rapists and predators, and their crimes have been worsened by a lack of sufficient action on an institutional level to prevent similar episodes recurring. Surprisingly enough, however, the first law dealing with the issue does in fact back to 1741.

The law was further revised at the beginning of the 1900s, and opened condamnations to the actions of the spiritual leaders that were made under the Pontificate of John Paul II. Punishments for priests were to be issued by bishops, and could vary from denying them the right to say mass to that of serving public functions but rarely would the priesthood sacrament be revoked. Up until December 2019, however, the official guidelines were to deal with all allegations internally as a church. Now Pope Francis, the current head of the Catholic Church, has asked bishops to conduct internal investigations and share information with civilian criminal justice systems – a step nothing short of revolutionary.

However, there was a time when sex ruled  the heart of Rome’s Church. In his book Secretes of the Vatican, Italian historian Corrado Augias gives several examples of the intertwining of power and lust that landed the key to the Papal Basilica of Saint Peter in the Vatican into the hands of a sex worker. In the year 890, a key figure known as lady Marozia – allegedly a very beautiful and clever woman – dominated the scene of the papacy for at least two decades. From the age of 15, she was a concubine to Pope Sergius III, with whom she later had a son. As Liutprand, a bishop and historian of the time, eloquently put it, this was the start of the ‘Pornocracy Era’ known as the time when the Papal State was effectively ruled by influential sex workers. Marozia commissioned the murder of her partner, married three times with influential noblemen, had more children, and lobbied for the election of three popes – even placing her own son on the throne. At the time of his appointment, Marozia’s son, known as pope Giovanni XI, was only 21 years old, and historians believe that the person in command was effectively Marozia herself. After a change in power dynamics, she ended up in prison; however, her family continued to hold the power as her eighteen year old grandson became pope under the name of Giovanni XII. His reign was short-lived, but full of scandals and crimes including incest, homicide, improper use of donations and sacrilege. Amongst other things, he also had his personal harem of young women and men ready to satisfy any of his desires. He died tragically at the age of 24, thrown out the window by the husband of a lady he was caught sleeping with.

Still today, sex and orgies take place in the Vatican – but all in a much more closeted and morally condemned manner. In 2019, French journalist Frédéric Martel published a book called In the Closet of the Vatican, in which he revealed the hypocrisies surrounding certain Catholic norms. He gained unprecedented access to the Vatican over a four year period and interviewed several cardinals, priests and Swiss guards, cross-referencing some of the findings with the Italian police. The way Martel got into this topic is perhaps the most intriguing part, as he found out about it when speaking to migrant sex workers near the central station in Rome. Thanks to some of their leads and contacts, he gained access to the inside of the Vatican. A review in the Isreali newspaper Haaretz stated that: ‘The gist of what Martel says is that there is a very high proportion of closeted gays among the Church’s leadership who cannot under any circumstances admit their sexual proclivity.’

The worst part is that sex is a taboo, which means that consensual sexual relationships, paid services and rape are all forbidden – hence pretty much on the same level of immorality. Who would be brave enough to whistleblow because of rape, when they, too, could be uncovered for having sex with sex workers? Sex and power are closely connected, and when it involves those who hold both the spiritual and physical upper hand it becomes a very dangerous cocktail.

Until a new wave of priests gets into the Vatican and starts reforming Catholic ideology to make it more loving and accepting of sex, there is little hope of change. Pope Francis, who left his fiancée to follow the call of becoming a priest and hence experienced love (and maybe sex), might well be the long awaited redeemer of this situation. No doubt, however, if sex were to one day become completely liberalised amongst the Catholic ranks, there would be no shortage of priests – and spending a weekend in a convent could be a Holy new and exciting experience.

The Editorial Team June 11, 2020
By Ebba Olsson When we speak of accessibility rights for people with disabilities, we generally…

The Editorial Team June 11, 2020
By Per Risberg Thanks to the wonders of technology a casual hookup is no further…
Tweets by UFUppsala